by Lindsey Winsemius - Posted 6 months ago 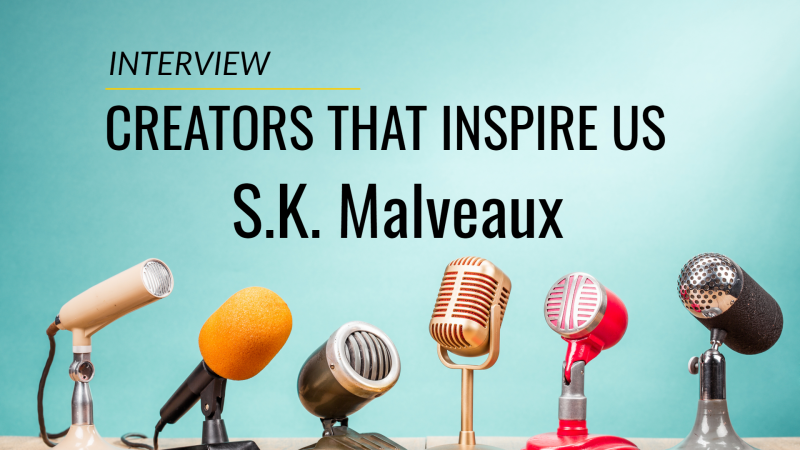 SK Malveaux is the comic writer behind the MusicMaker comic book series.
Watch our interview with her, and then check out her profile in the Marketplace to grab a copy of her outstanding series.

SK Malveaux, in her own words:

CC: Can you tell us a little about yourself?
SKM: I’ve loved comics my whole life. Ok let’s take a step back. I’ve loved comics since I was about 6. It start with the Saturday and after school cartoons of X-men and Spider-Man and eventually led to me buying my first comic (an issue of Tomb Raider) after awhile though and years of reading wizard I did grow out of it so much as I couldn’t seem to relate with chapters.
I’m a pretty obvious Iron Man and Hellblazer fan. I wasn’t able to identify with Peter Parker’s Spiderman or even Diana Prince’s Wonder Woman. It wasn’t that I didn’t understand the pressures of being young or what it meant to be a strong woman, there were elements there I could relate to but something was always missing with heroes. It was the way they reacted to pain. Most heroes are well... heroic. Tony Stark is skirt-chasing alcoholic genius. John Constantine is a warn-out, guilt-ridden cynic. What I loved most that despite their glaring flaws both not only fought the good fight but could charm the birds out of the trees. They weren’t just relatable but inspirational.
CC: Do you have any formal training or are you self-taught?
SKM:  My training is (ironically) as a fine arts painter.
CC:  How would you describe your style?
SKM: Gritty and witty.
CC:  Are you inspired by any particular works or creators?
SKM: The Tick, all the light that Peter Chung touches, Spawn, Batwoman, Daredevil, Deathstroke, all the light that Neil Gaiman touches, Harley Quinn, Iron Man, HellBlazer, Todd the ugliest kid in the world,  Deadpool, Chew, all the light that Chuck Palahniuk touches, David Bowie, The Black Keys, Venus in Furs, all the light that Oscar Wilde touc- yeah I agreed the jokes getting old.
CC: Tell us about the people you work with to create MusicMaker.
SKM:  I work with the supremely gifted artist Andres Quezada, who provides all of the artwork for the comic other than the variant covers. We recently brought in an unbelievably talented letterer named Matías Zanetti.
CC:  Can you tell me about your current project?
SKM:  Currently I’m working on a 18+ indie comic called The MusicMaker it’s a music based comic about a drug/ sex addicted musical genius who can manipulate people through sound and music. What truly makes the comic unique though is that it has playable music within the story.
CC:  What passions do you have outside of comics?
SKM:  I’m an avid music, book and movie fan.
CC: What do you think about working in the comic book industry?
SKM:  I think like everyone I’m nervous seeing the cons canceled and stores closing. But there is a clear shift toward more digital platforms (like Crypto) which gives me a lot of hope both as a fan and as a creator.
CC:  Do you have any advice for anyone that is just joining the industry for the first time, or looking to join the industry?
SKM:  Fake it til you make it and if no one discovers you, discover yourself.