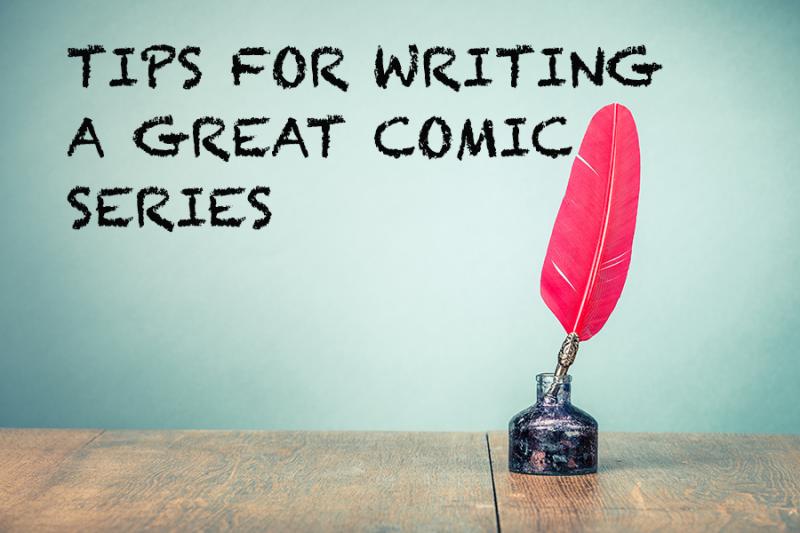 Welcome, my CryptoComic Compatriots! Today we discuss the necessities for writing a great comic series. What goes into the writing process and how do you keep it all straight. Read on to find out all about it.

When writing a new comic series with new characters I would recommend writing some character descriptions for each of the main characters as well as side characters.

Many non-physical characteristics will shine through in your artist’s renditions. If they are very noble and proud, chances are they will stand straighter and be shown from more of a “worm’s eye view” perspective.

If the character is sneaky and cunning, they might be seen slightly hunched and always looking off to one side or the other.

Not only will you need character descriptions, but you will also need a good thought-out backstory. You will need to see the motivations for every character; good or bad.

If your antagonist only wants to rule the world, then they will not be a good relatable character.

Your protagonist is the same way. If you don’t understand why they are opposing the natural order of things, then why root for them?

The more you think about the characters, the more “fleshed out” they become. Get to the point where you will always know what they are thinking and what they are capable of.

This is a very important stage. It should totally consume every part of your existence while writing this. Never write and just see where you end up.

This will take about 75% of the entire writing process. You must know exactly what is happening at all times. You, as the writer, must be aware of time not in a linear fashion, but in a God-like manner.

As you plan for everything, you can go back to the beginning and change events to match your new outline. Have every detail well thought out.

Figure out where all of your plot holes are and fill them before they end up in the final draft. Believe me, your audience will thank you.

One of the best pieces of advice I ever got was to plan for the absolute worst-case scenario and make it happen. This will now become your starting point.

This will give your protagonist the correct challenges that they will need to overcome. Think of the following scenarios;

It is a cold winter night and John Doe is walking along a dirt road. He is trying to make it to the gas station where he can call for help.

He walks for about 20 minutes before he sees an old payphone. He wonders if it will still be usable. He picks up the receiver and hears a dial tone. He is able to call 911. The day is saved.

John is walking along a cold desolate road. He is barely dressed for the weather that is blowing snow across his frostbitten nose. He shivers as the cold wind pierces his exposed skin.

There is no light from the moon as he marches forward step by agonizing step. The shock of each footfall racks his knees with pain.

Suddenly behind him, he hears the roar of an engine from a Chevy 350 hurtling its way down the dirt road. Before he can flag down the motorist, the realization that they don’t see him hits our traveler. He jumps into the ditch, barely missing the Chevy bullet.

As he lands he hears a cracking noise. He struggles to get up, he puts weight on his hand and falls back onto his face. A pain shoots up to his neck. He looks down to see the forearm bent at an unusual angle.

Shock sets in and he stares at his misshapen arm. A numbness sets in as hopelessness takes over. Barely making it to his feet, he feels the call to move forward. Ever forward.

Soon he rounds the last bend in the road as he sees a shining light. Hope finally returns as he sees the dim light of an old town gas station.

He picks up the pace, but then sees that the interior lights are off. His eyes begin to well up as he realizes what time it is. It will be hours until someone shows up for work at the old rundown station.

As he nears the store, he sees an old payphone. As he picks up the phone, he thinks to himself, “It has probably been years since this has been used.” Much to his surprise he hears a strange tone.

He barely recognizes it. He pauses until he remembers that this is the old dial tone. All he has to do is dial the police and an ambulance will save him. He reaches out with shaky hands and presses the all-to-familiar 911 and he is saved.

As you can see between the 2 scenarios, the first one is boring. There is no “heart” to the story. Our protagonist doesn’t have to go through that much. Yes, it's cold and he is out for a late night walk, but we aren’t rooting for him to make it.

In the second scenario, we see him going through something worse. It's late and cold. He is clinging to life BEFORE he almost gets run over and breaks his arm.

As you can see, the more crap we put him through, the more he has to overcome. This doesn’t mean that we have to be shoveling the crap onto him constantly or else it will look foolish for our hero to continue.

The 3 acts of a story

Our stories must contain 3 main parts; beginning, middle, and end. We call these the 3 acts. They do not necessarily have to be in this order to tell a good story. Look at the movie Memento by the legendary Christopher Nolan. We start off at the end and work our way backwards to the beginning.

The animated movie Megamind from Dreamworks starts out during the climax of the movie and then tells the story of how we got to that point.

Just have some fun with the format. Whatever you do, make sure that if you are going to go out of order, have some type of visual indication of the time jump.

It could be something as small as a box stating the date and time, or something as major as having another artist handle flashback scenes.

Here is where you establish the norm. By setting up the day to day we can see a starting point. We are able to get a grasp of the world and how it operates. It is from here that we must be able to base our understanding of the world around us.

In the Game of Thrones we see the life of Ned Stark. He is comfortable with his world. He has some duties that he is not happy with, but still we can see that everything tends to run smoothly and has for a long while.

After you have set up your normalcy, we must move quickly into the plot. The last thing we want is our readers to become bored.

What is the catalyst that sets everything into motion. It doesn’t have to be big. It just has to set up the dominoes. Once one begins to fall, that's when the story really starts to take shape.

The middle is where the heart of the matter is. We will get our character growth here. Our protagonist, as well as the antagonist must be tested. I am not just talking about the physical but their convictions must be tested as well.

The plot must always be thickening until even you are wondering “How the hell are they going to get out of this one?” You and your reader will spend a majority of your time here.

The ending is one of the hardest to write. Stephen King (the master of horror) even has stated that endings are almost impossible. Hell, he wrote an entire book about the need for a good ending; Secret Window, Secret Garden.

You must find a way to wrap up everything. No loose threads unless you are trying to set up a sequel of sorts.

I can tell you from personal experience that writing a satisfying ending is hard. You have to come up with an ending that isn’t cliche or too obvious from the beginning. You can’t have the deus ex machina that saves the day for no reason at all.

WHAT IS THE DEUS EX MACHINA?

It is defined as an unexpected power or event saving a seemingly hopeless situation, especially as a contrived plot device in a play or novel. It literally translates as “God from the machine.”

In the end it is just a gimmick used by writers that have written themselves into a corner. Think of it like this, in H.G. Wells’s War of the Worlds, the aliens are destroying everything in their path until they meet the dreaded bacteria.

If you have something seemingly come from nowhere to save the day, it totally defeats the purpose of the struggle that the protagonist goes through. You will have people questioning “Why didn’t that just happen at the beginning and save everyone the grief?”

I beg you, don’t do this without good (and I mean damn good) cause.

When you are coming up with your character descriptions decide what you want your character growth to be. Find a certain flaw such as pride and cure it throughout the story.

A good character study will focus the main plot around curing this flaw. Test them time and time again. Have the hero fail several times due to their main flaw until the final test where they prove themselves over their shortcomings.

If your character starts and ends the exact same way, there is no joy for the reader. They must overcome, they must move beyond what they were at the beginning. This is why deus ex machina is so bad.

Batman must learn to trust his family. Spider-Man must learn that with great power, comes great responsibility. What will your characters learn about themselves? This has to be front and center along with your plot and parel. They make up the trinity of a good story.

WRITE FROM THE HEART

I will conclude with this little piece of advice. Write because you love it. You will become a writer when you wake and all you can think about is writing. When you eat, sleep, breath your characters; you are a writer.

It doesn’t have to be poetry. Action, adventure, romance are all part of what makes this world beautiful and it takes a writer to bring that out.

As long as you bring some understanding or beauty to the world, you are a writer. Write and do it from the heart. You will never go wrong.