by Lindsey Winsemius - Posted 4 months ago 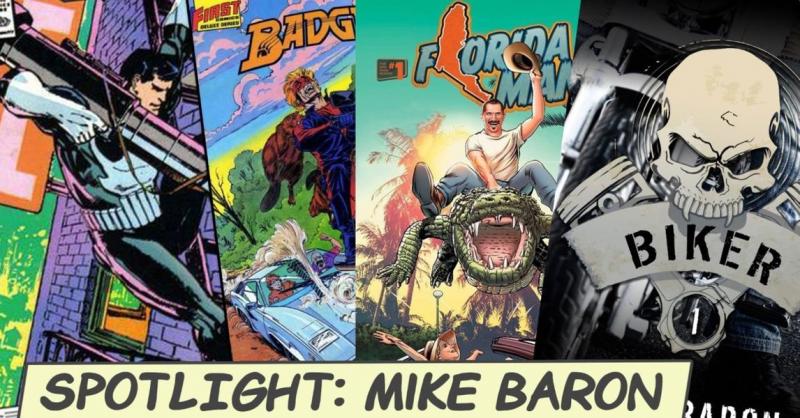 We had the honor of sitting down with award-winning creator Mike Baron to discuss his illustrious career, comics, and what he's working on next.

Mike Baron entered the comics industry with an illustrated text piece in Weird Trips Magazine #1 (March 1974) published by Kitchen Sink Press. In 1981, he published his first formal comics script with Nexus, the science fiction title he co-created with illustrator Steve Rude; the series garnered numerous honors, including Eisner Awards for both creators. A prolific creator, Baron is responsible for The Badger, Ginger Fox, Spyke, Feud, and many other comic book titles.
He and artist Jackson Guice relaunched The Flash in June 1987. Baron and Klaus Janson introduced the character Microchip as an ally of the Punisher in The Punisher #4 (November 1987). In 1988, Baron wrote the "Deadman" feature in Action Comics Weekly which led to two subsequent Deadman limited series.
Baron has also written numerous other mainstream characters including Batman and several Star Wars adaptations for Dark Horse Comics. In 2014, Baron published Biker, his first novel, about reformed motorcycle hoodlum Josh Pratt. First in the 'Bad Road Rising' series. In 2018, Liberty Island Press will release six Josh Pratt novels, and Disco, a story about a boy and his dog. He has created Q-Ball, a comic about martial arts and espionage, with Barry McClain Jr.

Mike Baron in his own words:

CC:  Would you consider yourself a writer, or artist?
MB:  Writer
CC:  Can you tell us a little about yourself?
MB:  I knew I wanted to be a writer since I was a child in South Dakota. I went into a cigar store and bought a John D. MacDonald book. I had an epiphany. MacDonald wasn't writing these for his health! I graduated from UW and moved to Boston where I began reporting for the Boston Phoenix and the Real Paper. But I always just wanted to write fiction. It wasn't until I returned to Madison, Wisconsin and met Steve Rude that my career began. We were in the right place at the right time and convinced Capital Distribution to publish Nexus. I wrote the first twelve pages by drawing them out by hand. I wrote comics like that for twelve years. Now I write full script.
CC:  Do you have any formal training or are you self-taught?
MB: Mostly self-taught.
CC:  Describe your style.
MB:  My goal is to grab the reader by the throat. I'm no great stylist. I seek the maximum impact with the minimum number of words. This doesn't mean the books are short, but that I try not to let the writing draw attention to itself. I want the reader to immerse himself in the story to the exclusion of all else.
CC:  What would you say most motivates you to do what you do?
MB:  A desire to entertain. Every writer has his own rules. Mine are l: Entertain. 2: Show don't tell. 3: Be original. All these seem simple on their face, but are difficult to achieve, until you know what you're doing.
CC:  Are you inspired by any particular works or creators?
MB:  John D. MacDonald, Carl Barks, Philip Jose Farmer
CC: Tell us about the people you work with.
MB:  Steve Rude and I created Nexus in 1981 and we are still working together. I have worked with Val Mayerik for many years, and look forward to working with him again.
Dark Horse has been one of my comic publishers for almost thirty years. I am now working with Chris Braly of Bleeding Fool on a number of projects, including Florida Man.
CC:  What creation are you most proud of?
MB:  If something turns out well, that's the project of what I am most proud, until the next one. However, in comics it would have to be Nexus and Badger. In novels, I'm proud of my Biker series, inspired by ol' John D.
CC:  Can you tell me about your current project?
MB:  Richard Bonk and I are doing a Nexus graphic novel for Dark Horse. Wolfpack Publishing brought out my third Florida Man novel this week, Catfish Calling. The Florida Man graphic novel will be out in a week.
I'm writing a military sci fi novel with Major Diggs Brown. Currently residing in Fort Collins, Colorado, Diggs served in Afghanistan and on the African Continent as part of the Global War on Terrorism.  Major Brown, or CPT Diggs as he is referred to in his emails home from Afghanistan, spent one year on active duty at the initial phase of the war.  His focus was training the new Afghan Army and conducting operations against the Taliban and al Qeada terrorist organizations.  In his spare time Diggs, along with Chaplain Andy, taught English to Afghan students in a bombed out village near their compound.  One of the results of Diggs' emails home describing the impoverished conditions of the school, literally thousands of pounds of school supplies were sent to his location from everyday citizens of America. I am writing a second Nexus novel.
CC:  What passions do you have outside of comics?
MB:  Martial arts, motorcycles, movies, reading, dogs.
CC:  Do you have any thoughts about the comic book industry?
MB:  The Big Two have forgotten the first commandment: entertain. They are circling the drain by offering tedious, didactic product that fails at its most basic job. They are not entertaining. A number of smaller publishers continue to offer quality product, and there is a lot of action in crowd funding.
CC:  Do you have any advice for anyone that is just joining the industry for the first time, or looking to join the industry?
MB:  The best way to have an editor take you seriously is to put out your own comic. Writers seek artists. Artists seek writers. You can run off a hundred copies or so cheaply at a local printer. But remember--you only get one chance to make a first impression.
CC:  Anything you would like to add?
MB:  Writers are people who have to write. You do it every day. Always carry a pen and pad and write down anything that interests you.
A huge thanks to Mike for taking the time to share his experiences and hang out with us! You can follow him in the CryptoComics community, connect with him on Facebook, or follow him on Twitter.
Check out his website to learn how to order print copies and learn more about him.