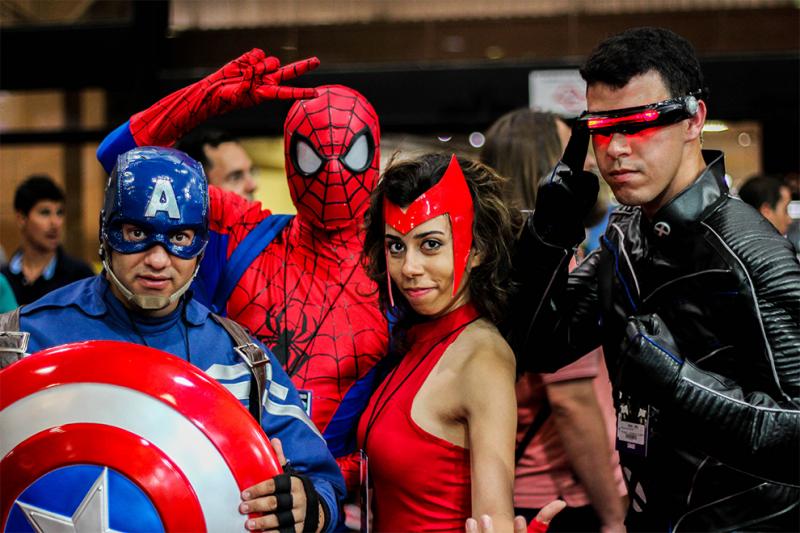 Welcome my CryptoComics Compatriots. In light of my favorite upcoming holiday, we are going to talk about the joy of getting dressed up; Cosplay!

There are so many great costumes out there for everyone of any age. Fat Thor seems to be extremely popular this year. Personally I am dressing up as Pennywise this Halloween in order to hand out candy while my wife takes my kids Trick or Treating.

This got us thinking about Halloween costumes and in our industry, we do costumes right. Lets talk a little bit about the various Cosplay and how it fits with comics and pop culture.

The practice of dressing up as a loved character from comic, movies, books, video games, or other pop culture. This is the best time of year, simply for this reason. It’s so awesome to see Batman or Chucky showing up at your door.

The streets look like a popculture flood straight out of a scene from Ready Player One. You can see E.T. walking hand in hand with Michael Myers while Elsa goes skipping past. You can hear the sugar buzz lingering in the air as dentist count all the future cavities. Such a wondrous time!

Now, those that happen to attend cons know that dressing up as your favorite character from Scooby Doo isn’t reserved just for Halloween. One night just won’t cut it for us. We get to do it all year long. Thank God for Comic Conventions.

Originally the term “Cosplay” (an obvious portmanteau of the words costume and play) was coined by Nobuyuki Takahashi of Studio Hard after attending Los Angeles’ WorldCon in 1984. Originally known as Masquerade but this doesn’t translate well into Japanese. This literally means “Aristocratic Costumes”.

The original costumes worn to a convention were the Morojos. This was way back in 1939 to the 1st World Science Fiction Convention and were fans of Myrtle R. Douglas and Forrest J Ackerman’s writings.

Quick fact, the first person to win a Cosplay Contest was August Olson from Monroe Washington who was wearing a Skygack costume.

There are certain rules (more like extreme suggestions) that must followed when Cosplaying, and in dealing with Cosplayers. Here is a handy guide just for you.

I realize that most of these rules only apply to conventions and not typical trick-or-treating, but they still need to be said.

I don’t think I need to explain this rule but for some out there, listen up. Cosplayers, even though they do this for your entertainment as much for themselves, are still people under all that makeup. Treat them as such.

Respect their boundaries!!! Hands off. If you want to get their attention for a Photo op, call out to them… politely. It’s not hard.

This rule is definitely a little bit for everyone. First things first, to the Cosplayers, under all that costume, you get hot and sweaty. Therefore, you will start to smell ripe. Please bring deodorant.

For others attending the conventions, you are moving around an indoor facility with thousands of other people. The ventilation typically can’t handle this type of stress. You get hot and sweaty, therefore you will start to smell ripe. In order to not olfactaily offend everyone, please bring deodorant.

I wouldn’t bring it up if it wasn’t an industry wide problem. Sorry.

Just because they are in a costume, doesn’t mean that you have rights to their images. Simply ask for permission and explain what it is going to be used for.

When we head to a con or event and there are Cosplayers of any fandom, we ask the person “Can we take a video of you?” If they say yes, we will tell them exactly where and when they can find the footage and that we will tag them in the video description if possible. We will then give them a business card to make sure that they can find the footage.

If it is an underage child, you must get permission from the parents before hand. That’s not only polite, that’s just the law.

Rule 4, Cosplay is for Everyone

Cosplayers are an extremely accepting remarkable group of individuals. It turns out that there are no rules saying that it is for certain body types, or genders involved.

The first time I took Jared (AKA BugMagnet) to a convention, there was a Princess Peach in front of us in a line. Peach turned around to reveal that they were a guy with a big old long beard. It was great.

As long as you are expressing yourself, it’s fair game. Cosplay is supposed to be fun. Enjoy the ride.

Generally if you are choosing to cosplay as a specific character, there are certain rules and mannerisms involved to complete the character. If you are in the costume, especially one that appeals to children, respect the character.

Don’t ruin a character for someone else. Cursing while dressed as a character like Captain America or Sailor Moon, just won’t do. All eyes will be on you so be careful, even while you are on break.

Rule 6, Be Aware of Your Surroundings

Some costumes can be massive or garner a lot of attention. In most conventions and situations where cosplaying is acceptable, there might be narrow aisles, walkways, or paths between other people. If your costume is far too big, it will make getting around hard for both you and the other attendees.

Think of it like this, if you are wearing a dress with a 15 foot long train in a convention, it’s going to get stepped on and potentially ruined. If the aisle is 4 feet wide and your costume is 6 feet wide, you aren’t going to get to see the venders down any aisle.

Be aware of your surroundings. You have no idea how many times I’ve been slapped in the face with a set of wings from someone turning around in costume.

This one is more for those checking out your cosplay. When it comes to cosplayers, most are die hard DIYers. Therefore, the props they have are often handmade. They can be delicate and break easily.

If you break it, its not like you can easily replace it. Ask for permission before touching. You have no idea how much time and energy has gone into the making of these props.

When it comes to these props, some go against the cons weapon rules. Almost every con we can collectively think of post their rules and regulations on their websites. Check to see if your props meet the standards set forth for everyone’s safety.

It tends to get awfully hot while your cosplaying. Don’t forget to hydrate. Just don’t forget.

DIFFERENCE BETWEEN A “STORE BOUGHT” COSTUME AND TRADITIONAL COSPLAY

Typically Store bought is cheaper and quicker, but you get what you pay for. Just seeing a morph or muscle suit painted to look like Green Arrow isn’t as cool as someone taking the time to create an actual authentic leather suit. When you do it yourself, its customized to you.

There is a massive level of pride in creating your own costume from nothing. The reactions tend to be much better. If you don’t believe me, check out this video of an Iron Man suit that this guy 3D Printed and assembled himself. You can’t get that on Amazon.

Now, there is nothing wrong with a store bought costume. Most of us don’t have the time and money needed to make one ourselves. Believe me, I would be rocking a real Batman suit with actual kevlar if I could afford to. Hell, I would wear it to every meeting.

With children, its even more justified to go store bought. Since they are still growing and might only get the chance to wear a costume for a month or so, spending $2,000 and putting in 100+ hours of work just isn’t feasible.

No one is going to look down on you for a store bought, but if you have the time, patience, ingenuity, and expendable income, go for it. Have fun and experiment. Just remember that it won’t be perfect your first time so keep at it and eventually you will be a pro.

Here is a challenge to all out there that love to dress up and hit the town; we want to see a book! Head over to the Marketplace and create a book using the images of yourself in costume.

Add images of your friends. Add a step by step on how you made your costume. You can even add patterns if you’re so inclined. In this living journal, you can add commentary about your adventures in Cosplay. Add audio about what you were doing, who you were with and where you were. You don't have to add all these cool features, our marketplace just allows them.

To anyone that creates a Cosplay Living Journal in the year 2021, I will have a secret surprise for you.

Copyright © 2018 - 2021 CryptoComics.com. Software and Design by: apogeeINVENT
All Rights Reserved. All content (art and story lines) is owned by it's respective companies/creators.
We are an uncensored Marketplace built for the Creators of picture story based content and artwork, and strive to be a champion for the creator and the buyer. If it isn't illegal we allow it, and we are dedicated to letting natural market forces dictate content and price. The views and content of those Creators who publish on our website are their own and not necessarily that of CryptoComics Marketplace or its' affiliates.
Terms | Privacy | Login