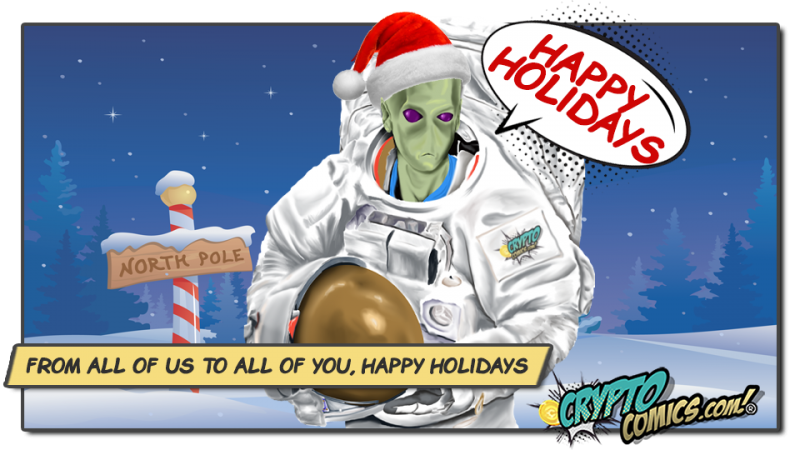 'Twas the night before Christmas, when all thro' the studio,
No editor was stirring, not even as an artist with a portfolio;
The pencils, laid down by the easels with care,
In hopes that St. Nicholas soon would be there;
The writers, at home all snug in their beds,
While visions of NFTs danc'd in their heads,
And Bug Magnet in his 'kerchief, and I in my cap,
Tried to settle our brains for a long winter's nap-
When out in the Marketplace there arose such a clatter,
I sprang from the bed to see what was the matter.
Away to the window I flew like a “non named Superhero from DC”,
I turned on the Ring doorbell and opened the app.
The moon on the breast of the new fallen snow,
Gave the lustre of comics to objects below;
When, what to my wondering eyes should appear,
But David Lillie with Dreamkeepers, and eight tiny rein-deer,
Such a little old driver, so lively and quick,
I knew in a moment he was a friend of St. Nick.
More rapid than manga his coursers they came,
And he whistled and shouted, and call'd them by name:
"Now! T3, now! Tidlewave, now! Volk, and TCT, Valeries and Gerimi’s,
"On! Cloudscratcher, StarCrossed, and Top2 and Mike Baron;

We here at the CryptoComics Marketplace just want to wish you Happy Holidays. We love having some fun with you and want to personally invite you to our CryptoComics Couch podcast.
They will be live every Monday at 7 PM MST. We absolutely love getting into the live chats and mixing it up so please feel free to let us know your opinions on the various topics and if you are new to our shows.
Here is a small token of our love for all of you in this great ever-expanding community. Your new badge code is “Holidays2021”
From all of us to all of you Happy Holidays.