by Matthew Russell - Posted 2 months ago 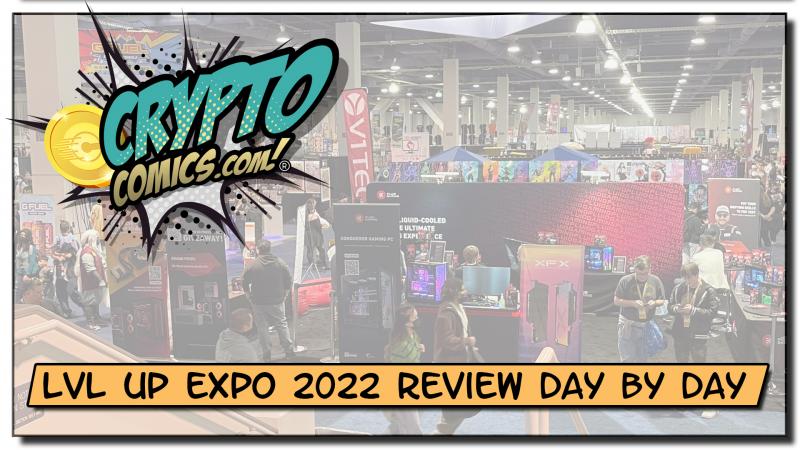 Welcome my CryptoComics Compatriots. How are you doing? I wanted to make sure that you all could join me here in Las Vegas for the LVL UP Expo. It is a rad convention that is based on the tech side of geekdom.

Since many of you can’t join us in person, we will be taking tons of photos and video content to be able to share out with you. I also wanted to give you a play-by-play of our trip from Idaho to Vegas and back.

THE DRIVE TO VEGAS

Frey and I live about 9 hours away from Vegas. Instead of flying (in retrospect, we should have just done that) we decided to drive.

The night before we left, there was a little bit of a snowstorm in Idaho. As we loaded up the car, we thought, “It's not that bad. Plus it will be over soon.” How wrong we were.

From South East Idaho to almost St. George Utah, the winds were blowing, and the snow just kept getting worse and worse. Speeds on the highway were ignored. Normal posted speed limits are 75 through Utah. We, at on point, where driving 25 MPH.

Right before leaving Utah, the roads cleared up and we were luckily able to make it to Las Vegas. Upon arriving, we found out that even Vegas got a bit of a snow flurry earlier in the day. There were no signs of Vegas ever getting cold by the time of our arrival, but it still happened.

The funny thing is that a few days, Frey was trying to decide to take his bike to the event. Can you imagine him on a Harley in a snowstorm? I laugh picturing it.

We got to stay at Digital Dwight’s Air B&B. This place is NICE!!! More than anything, I love the company we keep!

IN THE APOGEE OFFICE

The CryptoComics parent company is ApogeeINVENT. Most of the team that works on CryptoComics works out of their own home offices. Since Apogee has an office in Vegas, we decided to stop in for a quick visit and possibly try to get some work done.

We ran into some familiar faces while there; you might remember Brodo and Ashley Massacre. They had joined us quite a few times on our past shows. It was great to have lunch with them and catch up.

You can check out their Twitch streams over at https://www.twitch.tv/ashleymassacre_x If you love gaming, their stream is one to watch!

THE LVL UP EXPO DAY 1

As we hit the Lvl Up Expo, it was wild. We broke out the Go Pros and ran around getting every single Cosplayer that we could.

We started to try to talk to creators. There was so much to see.

Personally, I was running around like a chicken with their heads cut off. It finally came time to take a break. Normally I have jerky in my backpack but somehow I forgot it at the house that we are staying at. I was hungry.

Frey and I decided to step outside to hit the food truck…mistake. I tried to keep it as cheap as possible and still managed to spend $9 on a simple hotdog. This is why I suggest that you bring your own food to these events.

We checked out some seriously cool events and met some amazing people. Day 1 was amazing!

THE LVL UP EXPO DAY 2

This was a day to remember. We had gotten off to a late start due to oversleeping. There was so much excitement the day before that neither Frey nor I heard our alarms the next morning.

This was easily the largest day at the LVCC (Las Vegas Convention Center) and the lines wrapped all the way around, I would say almost 3/4th of a mile. I dropped Frey off at the front food while I tried to find a parking spot.

That endeavor took nearly 2 hours before I was able to find the last spot in another parking lot connected to the event center.

Once inside, the crowds were enormous. We wanted to get more footage of Cosplayers, but the sheer number of attendees didn’t allow for such a thing. We decided to shift our focus to the vendors themselves.

There was standing room only for the remainder of the day. After talking with staff members later that day, we found out that there were so many people that the Fire Marshall wouldn’t allow more people in, until many left.

The event center is a massive building, at 2.9 million square feet. Another convention was set up in another location during Lvl Up Expo. The space being utilized by Lvl Up was determined on ticket sales from the year before as well as projected growth.

They had managed to underestimate this year's growth and ticket sales were through the roof. In short, they weren’t prepared for how big they had gotten.

Since the influx of attendees didn’t allow us to film too much, just not enough room, we hit some panels. I love the panels. Three is just so much amazing information out there that no one thinks about, except panelists, and they bring you all of their knowledge and expertise. It’s so fun to get an insight into their worlds.

THE LVL UP EXPO DAY 3

We had learned from yesterday’s mistake and were fully prepared and rested from the night before. We took off early and found a great parking spot. The event staff let us in early so we were able to get some great footage of everyone plowing through the convention doors.

Frey had made his way onto the convention floor to be able to talk with various artists in Artist Alley and we were off to a great start.

We got to meet up with Cardell Cole, the creator of Top 2. He was there as a fan and not trying to sell anything. Sometimes we all need a break from the grind.

After meeting up with Cardell for a while, Digital Dwight (from here on out, Digital Dwight will be referred to as DD) joined us to film the convention floor. We all had so much fun making our way through every booth, checking out every cosplayer, and just enjoying the excitement of it all.

You can hop in and get a free ride in a Tesla through this tunnel. It's a fun ride. If you are ever in Vegas, I recommend checking it out.

HITTING THE TOWN WITH CARDELL COLE

This was a day that I was really looking forward to, and it did not disappoint. One thing that we like to do when traveling is having a local creator show us the comic shops that they go to in their area.

Cardell took us to Maximum Comics. As soon as you walk in, you're greeted with a giant Hulk! The detail in this 8-foot statue was impressive. Along the sides were massive comics on the walls. They had a huge section dedicated to Indie Comics too!!!

This was a typical comic store, but turned up! Check out our walkthrough below.

After the walkthrough, we got to do a quick interview with Cardell as he talked us through his reading list and why he goes to the other side of Las Vegas to get there.

He then took us to a Cinnamon roll shop to die for. As a fat man, I was excited and already breathing heavily. All I can say is “Thank God I brought extra insulin.”

Next, we went to Riddler’s Velvet Underground. This was a store that Chad Hardin had sent us. Last year, Frey went there by himself and recorded it. Unfortunately, he was so excited that his video was so shaky that it was unusable.

Velvet Underground is no joke. This has got to be the best comic shop that I have ever walked into. It has very dim lights and stuff piled everywhere. As you start looking at the stacks you will see some treasures that you won’t believe.

The coolest thing about this shop is its backroom! You will have to see our video to believe it. I totally understand why Frey was shaking with excitement in the first video. If you are ever in Las Vegas, this shop is a MUST!!!

I would like to extend them a very special thank you to Riddler himself, for giving us a private tour and being the coolest host that I have ever seen. I can honestly say that I have never been surrounded by so much history.

Deciding to drive all the way back to Idaho is a single shot, might have been a mistake. As I drove, I was trying to listen to an audiobook (I am on book 5 of the Alex Cross series by James Patterson).

Frey got bored. If anyone knows Frey, they understand how crazy he can get if he gets restless. All I will tell you, if traveling with Frey, you will stop at every taco shop along the way. Turns out Beaver Tacos are not that impressive.

OVERALL EXPERIENCE AT THE LVL UP EXPO

If you are ever given the chance to hit this Expo, DO IT!!!!