Checking Out the Indie Comic Market

by Matthew Russell - Posted 4 months ago 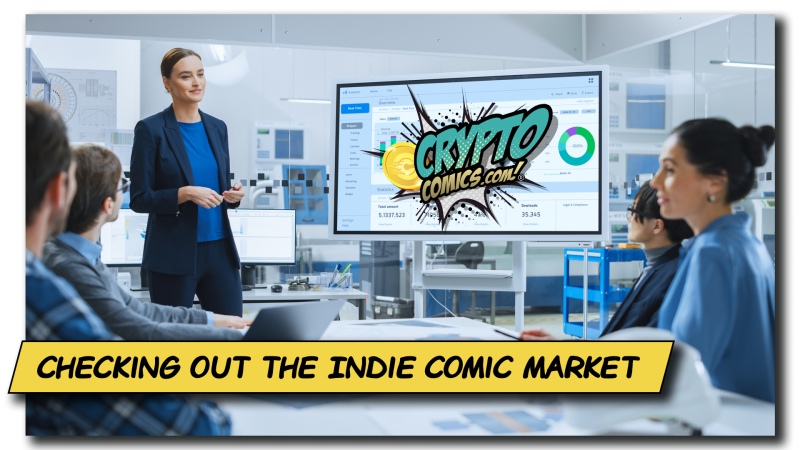 Welcome my CryptoComics Compatriots. Today we are checking out the Indie Comic Market. We will be looking at everything from the global comic market, driving factors, as well as restraining factors. Let's get into it

This article is an overview of where the market sits and why it has gotten to where it is. I will not be getting into a long and gritty in-depth study where I break down every dollar that passes through a publisher’s hand and how executive decisions led to this.

I had to write an article like that years ago for an economics class in college and it left me mentally scarred for life. This will cover the broad strokes. I will give you a clear understanding of where Indie publishers sit, the challenges they face, and why they are so dang rad!

The comic book market has been growing in leaps and bounds since the initial mandated shutdown in 2020. I swear, that year was a supervillain unto itself. One of the positive things is that more and more people have started reading comics again.

The global comic book market hit 8.49 billion USD at the beginning of the pandemic. Unfortunately, the big publishers had a “Pencils Down” order, leaving mostly Indie books to fulfill the demand.

In that year 73.9% of comics on Kickstarter and other Crowdsourcing sites were successful. This is compared to typical Kickstarter publishing campaigns (books and other magazines) which normally sit at 49.4% successful launches. Everyone loves comics.

In 2021 the global comic market went up to 9.21 billion USD with the return of the major comic publishers.

The growing popularity of comics can be traced back to the cinema. Once comics became mainstream and firmly embedded into the world’s nomenclature, they became “cool”. This is something we geeks have known for decades. It just took Robert Downey Jr. to show the rest of the world.

The popularity of the “superhero” brand is increasing with every new movie. These are intrinsically tied to comics. Once a comic fan is hooked, they begin to realize that there is so much more out there than just the capes and tights crowd.

Think about it like sports; baseball for instance. A fan will love a team; mine is the Seattle Mariners. I will always be a huge fan. I went to the games as a kid. I memorized all my favorite players. In the end, they did one thing only, play baseball.

Comics allow our heroes to play multiple sports if you will still go along with this metaphor. We have the Superhero genre (football), horror (soccer), and romance (baseball). The point is that people are finding out that comics don’t have to just be one thing, and indie comics are specifically tailored to this notion.

Man, Woman, boy, girl, it doesn’t matter, there is plenty for everyone.

As mentioned in the intro, digital access plays a large role in the escalating adoption of the comic industry.

We fans are also at the forefront of any digital technology revolution. I’ve written about this in the past, but I might have to do a real deep study with a psychologist about why comic fans tend to embrace technology faster than most other groups. Let me know in the comments below if this is something that would interest you.

With easier access to content, readers are able to find their niche. This means that comic creators are “coming out of the woodwork” as my dad used to say. There has been a surge in creators trying to tell their stories.

The UK has shown an increase in Indie creators by as much as 63% in 2020. I have not been able to find any definitive data on the US as of today, but I will keep digging.

Many think this is all due to the rise in smartphone and tablet technologies. Now it is easier to create than ever before. They have apps specifically designed to simplify the process and make it quick and easy.

Anyone can create now. It doesn’t have to be professional, just finished and there is a market for it. This could lead to a downward turn for Indie if we are not careful. It is a mixed bag with 2 distinct schools of thought, but more on that for another time.

There is a lot going against the typical Indie creator right now. It is a constant uphill battle, but one with a great reward.

Creators are constantly still fighting the stigma that comics are strictly for kids. Many serious comics are built with adults in mind. This doesn’t necessarily mean that it is in any way pornographic, but more nuanced in its storytelling, with more complex themes.

Art styles may still lend to the “comics = kids” mentality. I have seen very serious comics and the art style that accompanied the comic was created by a popular artist between work creating covers for children’s books.

Other creators have turned to less experienced artists in order to get it created on a VERY limited budget. As a result, the creator's vision gets lost in translation on the page.

Initial money is a huge problem for Indie creators. Mainstream publishers will commission a comic to be made and everyone is paid accordingly. With Indie, there is almost NEVER any money upfront.

Speaking from experience, I had to save and save to get an artist. This often means a second job, just to hire someone to do certain work on the comic. This leads me to my next restraining factor, time.

The time between comic issues is a huge hurdle to get over. Since major publishers have staff writers, artists, colorists, and so on, 1 issue comes out each month. You are able to complete a 12-issue long-running story within a single year, a short amount of time.

With Indie comics, a single issue can take a considerable amount of time. Often 4-6 months to get a single issue to press, that same 12-issue story arc can now take several years to tell. This can result in a massive loss of readers from one issue to the next.

Social media. Get your name and your book in front of anyone that will listen, even some that won't listen. As an independent creator, you have to become a master at marketing; marketing yourself, marketing your creation, and marketing everything around you.

If your comic talks about an important social issue, you had better be letting people know your position on said issue and letting them know where they can find your book.

Use every opportunity to let people know about your comic, and where to find it, hopefully on the CryptoComics Marketplace. Creating the comic is a full-time job, marketing it should be equal to 2 or 3 full-time jobs.

Blog, join a podcast as a special guest, the point is to talk endlessly, and never stop. Do not give anyone the opportunity to forget you or your comic.

I would love to really get into the segmentation of the Comic Market and cover various topics such as global market shares, end-user analysis, distribution channels, regional insights, key players, and industry developments. If you would like to see something like this, let me know and I will start to gather all the information that I can on these topics.

Until then, we are gearing up for another great CouchCon. I hope to see all of you there. Big things are happening with huge announcements from amazing creators. Be on the lookout.