by Matthew Russell - Posted 5 days ago 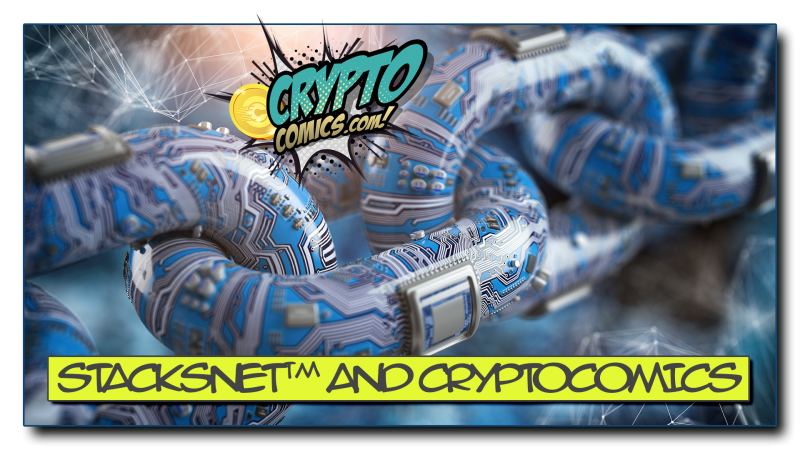 Welcome my CryptoComics Compatriots! As we inch closer and closer to our launch, I wanted to take this time to explain StacksNET™.

StacksNET™ is the blockchain that runs our glorious system. Created by ApogeeINVENT, it is a CLIQUE cross-platform Proof of Authority that runs on Ethereum Compatible Networks. As most comic aficionados read that, the first thing they say is “huh!?!”

I totally get that, so, let me explain what this means in plain English with as little technical jargon as I can.

When Joe first explained to me that we will be using the Clique, I was a little baffled. I knew about various Proof of Work systems and was still in the process of learning that there were other types of systems. Clique was still outside my wheelhouse. So, I a little digging. Here is the truth; the good, the bad, and the ugly.

WHAT IS A CLIQUE?

Clique is the consensus algorithm. I know, I know. I said little technical jargon, so let me explain.

Let's start with the Ethereum network.

With the Ethereum blockchain, everyone is running the same program on a network. Each computer connected to the network is called a “node”. Ethereum relies on node operators to process everything happening on the network.

Basically, it is a secure database that anyone can access. As different things happen on the network (such as buying a comic, selling a comic, creating a comic, or anything else you can think of) a new block of information is added to the chain.

No one can tamper with the blocks because everyone can see them. This doesn’t mean that you have to physically be looking at them, your computer will do that for you. Your computer will “validate” that the transaction is legit.

To do this, it must be validated. There are several methods of this, depending on the type of network that you are on. There is PoW (Proof of Work), PoS (Proof of Stake), and PoA (Proof of Authority).

Currently, StacksNET™ uses Proof of Authority but we are evaluating the potential adoption of a Proof of Staking consensus as well. Be patient.

Since we are learning about StacksNET™ and that uses PoA, let's dig into that.

As we have said before, these use consensus mechanisms to run things. These are a set of rules and incentives that allow the various nodes to come to an agreement about what goes on, in the Ethereum Network.

At the genesis of the Eth blockchain, the agreed-upon method was PoW (Proof of Work) but as time goes on, we can see the cracks in that shiny armor and everyone is working to the transition to a more manageable, stable, and better way of doing things.

PoA (Proof of Authority) fixes many of these issues.

As we have said before, these use “consensus mechanisms” run things. These are basically a set of rules and incentives that allow the various nodes to come to an agreement about what goes on, in the Ethereum Network.

PoA is a low energy consumption alternative to PoW that runs by giving a small number of Blockchain nodes the power to validate transactions and interactions within the network.

This means that only a few validating machines are responsible for generating each new block of transactions. It is a low-energy alternative due to the lack of “technical competition” between validators.

This system of low-powered validation is what StacksNET™ is built upon. Eventually moving toward an even better alternative PoS (Proof of Stake).

PoS (Proof of Stake) allows the network to choose which participants get to validate a new transaction. This is done by locking up a set amount of your Eth (decided upon by the user) within the smart contract, for a chance to validate new transactions for a reward.

There are still some pros to the PoW setup. With PoS, when staking your eth on the network, you are putting it up as collateral to validate the next block on the chain. When you are in a staking period, you often can’t sell your assets.

This means that if the market falls, as it will fluctuate like in any market, you often can’t sell any staked assets.

When people are talking about the price of eth or generally, if they have spent eth on a site such as Open Sea, they are all run off the Ethereum Mainnet. This was launched in 2015 and is an open-source blockchain.

It is still very much a PoW network. If you were to buy and sell on multiple sites and store your assets in a wallet, it must be connected to this network. You will have to navigate back and forth between a PoW and a PoA or PoS system.

StacksNET™ is a custom sidechain built on the Clique architecture. This means that it has all the benefits of the PoA system. This includes a faster blockchain compared to a network running Ethash (a PoW algorithm for Ethereum 1.0).

This means that a network running Clique can create a new block in roughly 1 or 2 seconds VS the standard 15 seconds on the mainnet. Block size is an arbitrary notion now. Granted, small blocks will still process faster than larger ones (containing multiple transactions in a single block), but this won’t be noticeable to the end-user.

This comes with stronger security. If the machine of a validator becomes compromised and proposes incorrect blocks, other machines will step in and vote out the “bad” block. The opposite is also true, if a compromised node attempts to vote to remove a good block, others will step up and outvote the removal of the correct block.

Yes, cryptocurrency is known as an energy guzzler. I mentioned this earlier. This is because, in order to mine crypto, it requires substantial computing power. This results in consuming an alarming amount of non-renewable energy sources worldwide.

Granted, none of those countries are known for consuming much power, but it still deserves mention.

What Clique and StacksNET™ offer is a much greener alternative. Simply by not having the competition among the validators, all trying to compute the large complex mathematical problems using their computers’ processing power, the various minors are chosen via an algorithm based on a number of factors.

This means that it is even more secure with far fewer mass computing requirements.

WHAT DOES THIS MEAN FOR YOU?

With the added security and the larger blocks, this is a drastic improvement that the end-user will appreciate.

The larger blocks will result in more and faster transactions. It will also allow us to keep the prices of “gas” down. No this is not the type of gas you put in your car.

Gas is simply the fee to do business on the blockchain. Gas is what is used to pay those that validate the transaction. The price of gas is determined by supply and demand. I have seen gas prices skyrocket up to the equivalent of $25.77 USD for a smaller transaction (Uniswap V2) as of the time of this writing.

This means that any transaction would cost that in gas. So a comic listed for $1.00 USD in eth would run you $26.77. We totally understand how many potential customers would be deterred and think this is an outrage. One of the most amazing advantages with PoA (especially in our case) is that it allows us to save the buyers the high gas fees. One of our main reasons for even having our own network is to make blockchain practical by minimizing wasteful unpredictable network fees.

We will be launching StacksNET™ using the current Clique’s Proof of Authority network. Welcome to the future of comics!