by Lindsey Winsemius - Posted 3 weeks ago 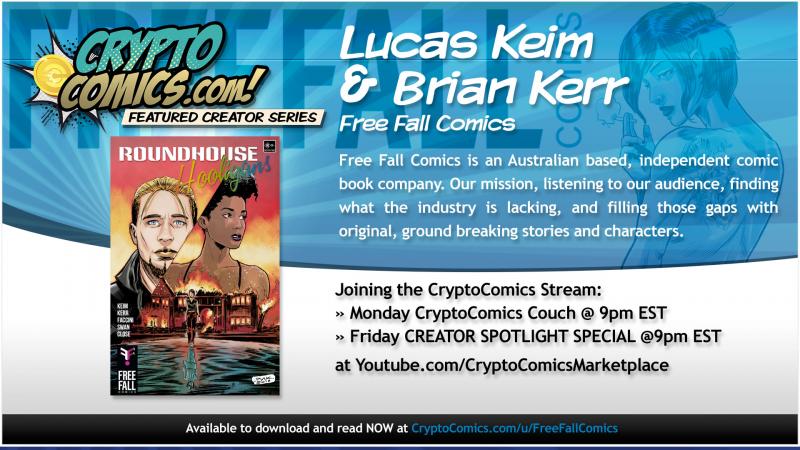 In this week's Spotlight, we met with Australian publishers Free Fall Comics. Lucas Keim and Brian Kerr, the talented duo that created the first comics published by Free Fall, and the owners, share their story.
Check out their profile in the community, and borrow their first book Roundhouse Hooligans.
A quick summary, in their own words:
CC:  Do you publish certain genres, or all comics?
FFC:  All genres (Eventually)
CC:  Do you publish in print, digital, or both?
Only digital at the moment
CC:  How did you get started in Comic Book Publishing?
FFC:  Started in a film background, once I realized that most of my screen plays would never get made in Australia because of there scale I turned them into comic books scripts.  The rest is history.
CC:  About how many Creators / comics have you published?
FFC:  Just the one with another on the way.
CC:  What do you like most about the comic publishing industry?
FFC:  There are no limits to what you can create, except money and your budget. No studio is going to say you cant put that scene in because fear of losing money and an audience.
CC:  Is there anything you'd like to see changed in the industry?
FFC:  I think the indie comics book industry is going in the right direction and that is is the future of comic books.
CC:  What passions do you have outside of comics?
FFC:  Film making, cooking and gaining more skills as an artist in all areas of production.
CC:  Do you have any advice for Creators looking to publish?
FFC:  Never give up, a lot of people close to you will not always believe in you and they may even try to talk you out of it.
Don't ever let anyone kill your dream, if you wake up every morning and it's the first thing you think about, then that is what you are put on this planet to do.
Thanks again to the Free Fall Comics team for joining us and sharing more about their publishing journey, their inspiration, and what they're working on next.
Connect with them:  Facebook  /   Patreon  /  Instagram  /  Linktr.ee