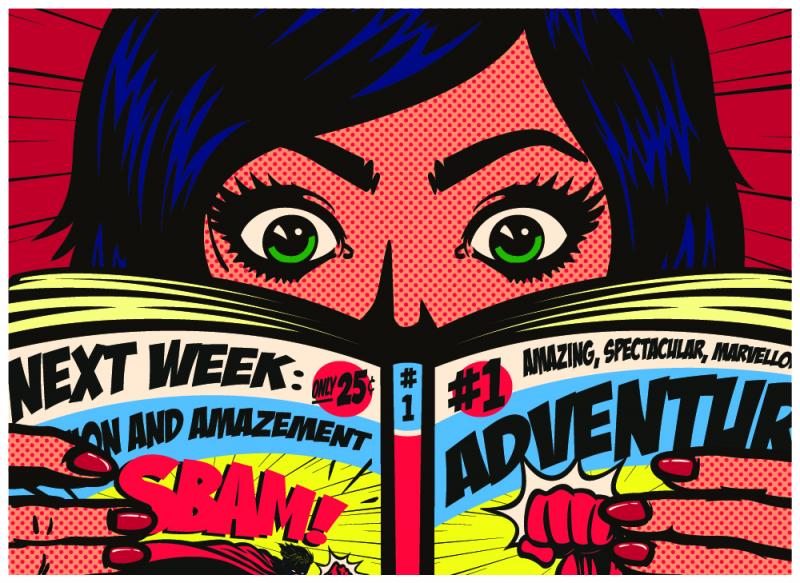 Welcome, my CryptoComic Compatriots! I hope this year has started out better for you than 2020! (F*** 2020!!) Last year was a bad one so I’m hoping that it is all going smoothly for you.

During my New Years’ party, I got asked the question “What’s the big deal with comics?” I was actually stunned because I thought that everyone who knows me knows how much and why I love comics.

As I started to explain why I love them, the person who I was talking to (who shall not be named) raised some interesting questions like why are they so popular, how do you even know how to read them, what's their general history and why do some characters do stand out so much when others are so much cooler?

Well, lets get to explaining everything...

I have heard comics called “Modern Mythology” so many times that it almost doesn’t seem like a viable argument anymore, but it’s actually true.

It’s easy to see DC’s mythology. I made you a list to basically compare the JLA to their Greek counterparts. 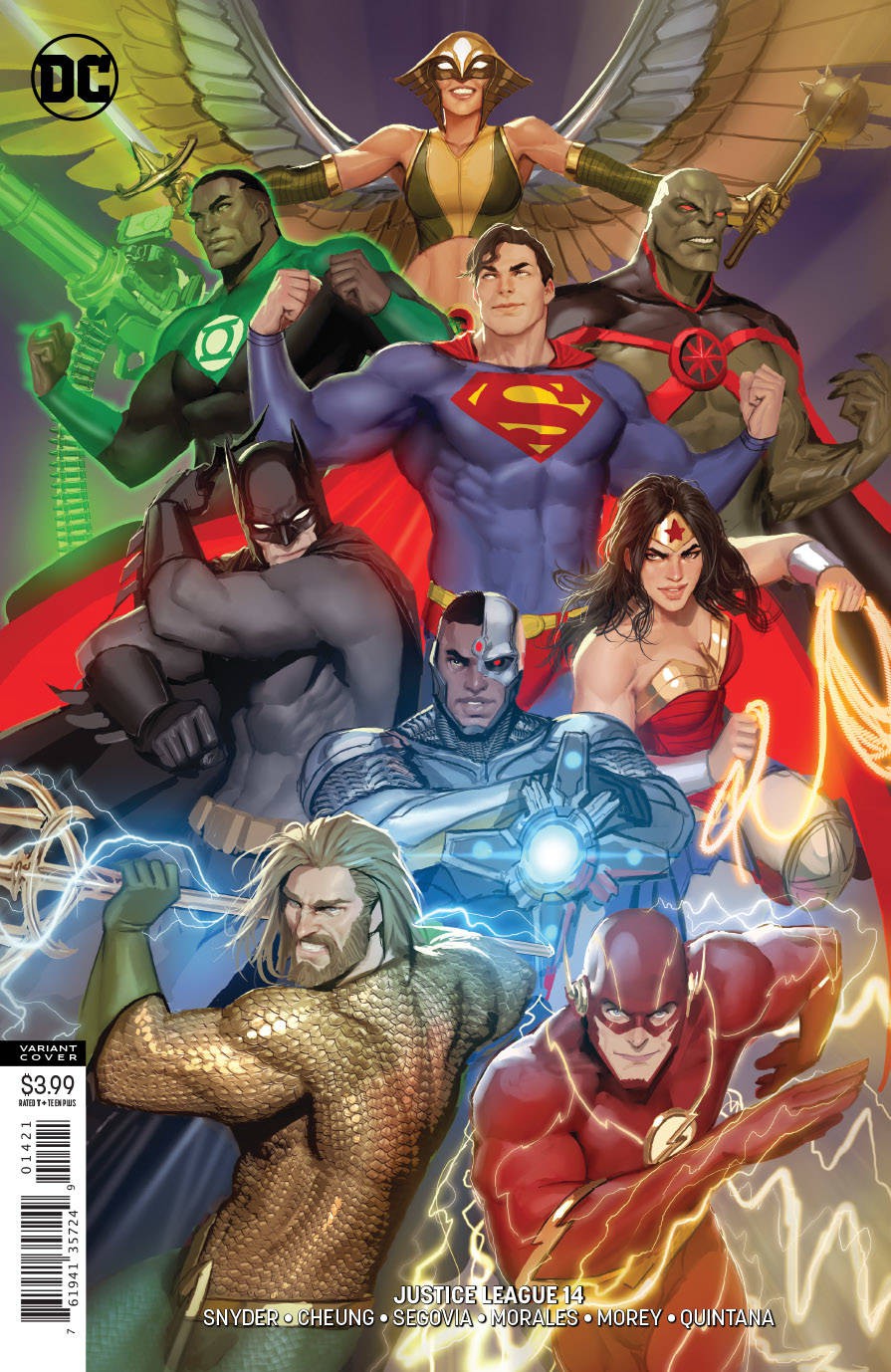 I am not going to get into all the millions of characters in the various iterations of the JLA, nor their Marvel & Image counterparts. You get the idea.

Mythology was created to pass on stories, entertain, and give us some pretty good “Don’t do that” types of lessons. Comic books give us the same type of insights. I’m sure you’ve heard the phrase “With great power comes great responsibility? The mythology behind Zeus is riddled with this theme as Zeus ignores his lovers after having children with them.

How do you read them?

Lets just stick to American and European comics for this. Manga is a little different.

We read them like anything else; left to right and top to bottom. As the stories got more complex, so to did our panel layout. Below are some examples with arrows showing us the way. 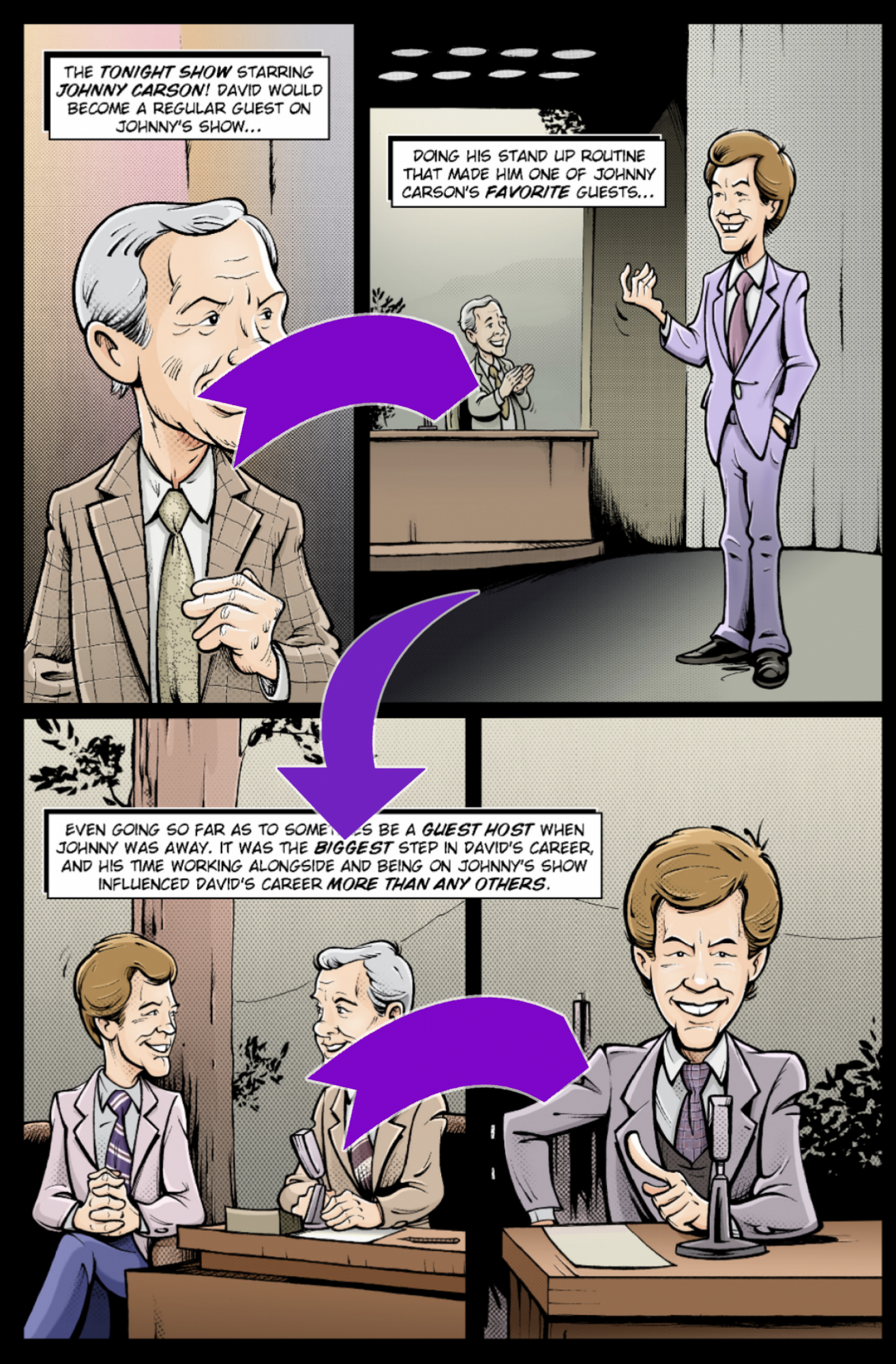 This is a standard 4 panel layout taken from AirWaves: David Letterman. As you can see, left to right, top to bottom. 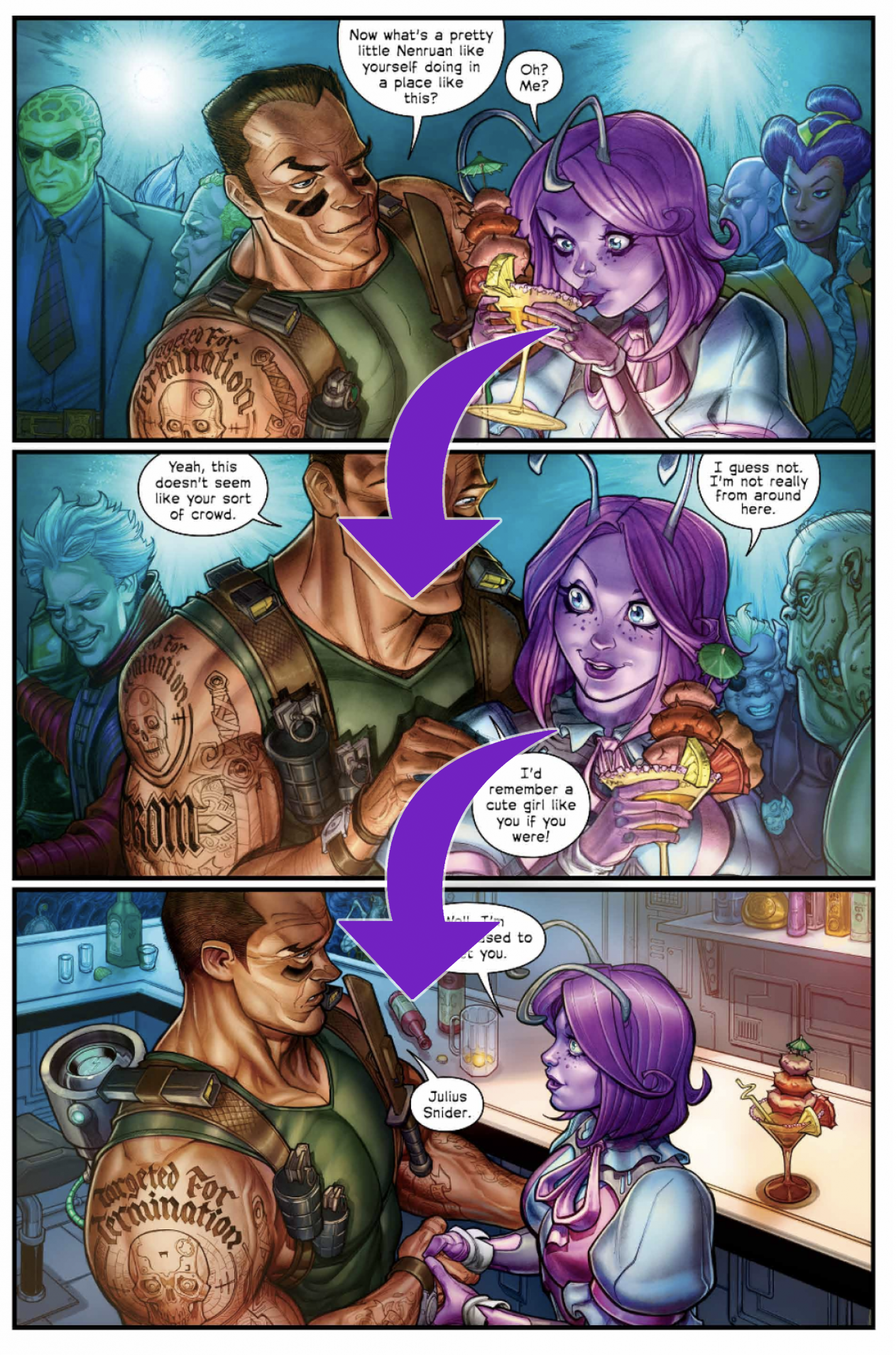 This 3 panel layout from Temerity Issue #1 is pretty simple, just naturally follow the panels downward to get the story. 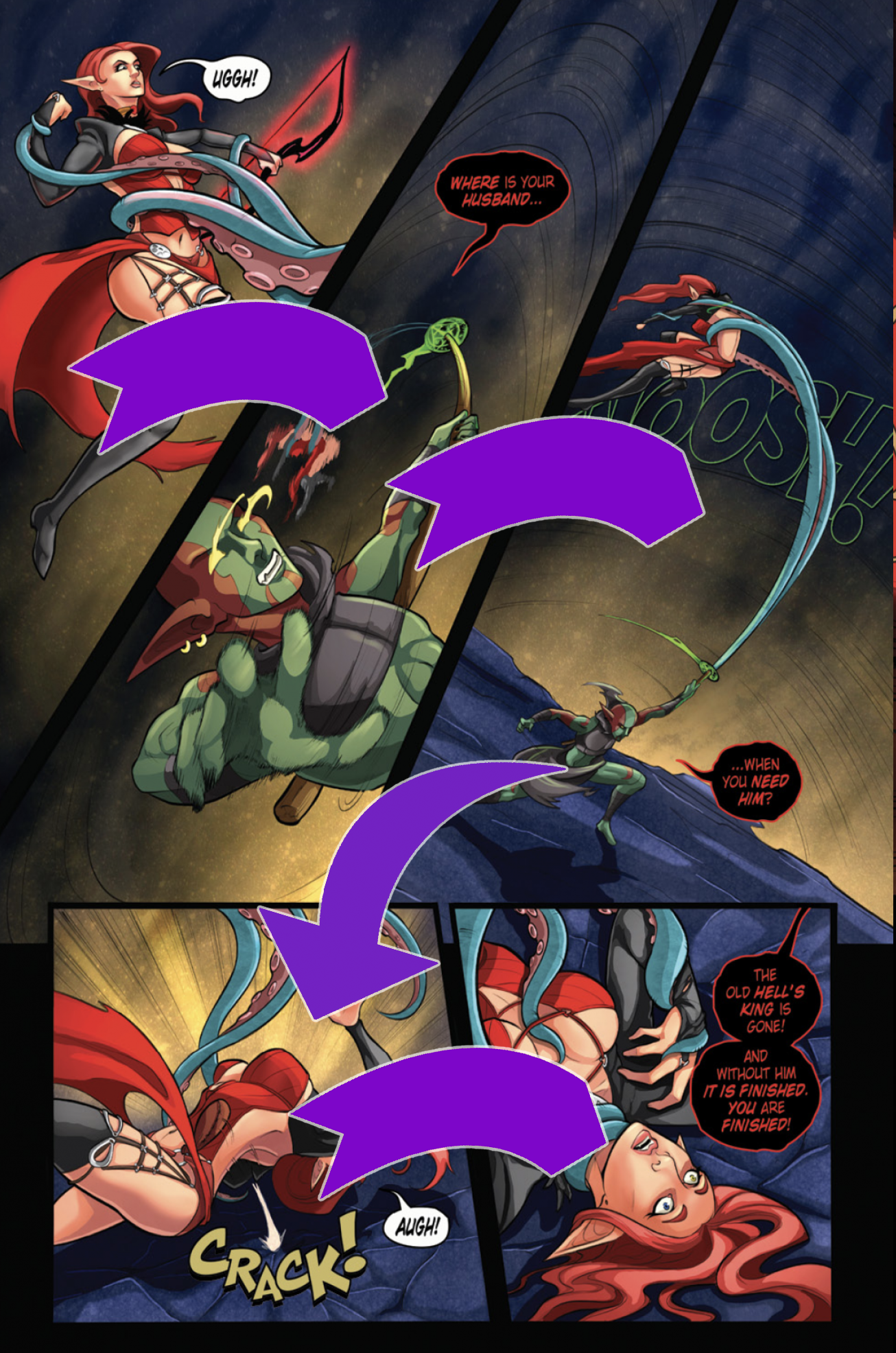 This page from Hellbringers is a little more complex. If you look at the 3 top panels, we move right to left just the exact same way that we would the 4 panel from Airwaves. Then we drop down to the bottom 2 panels and they also go right to left. 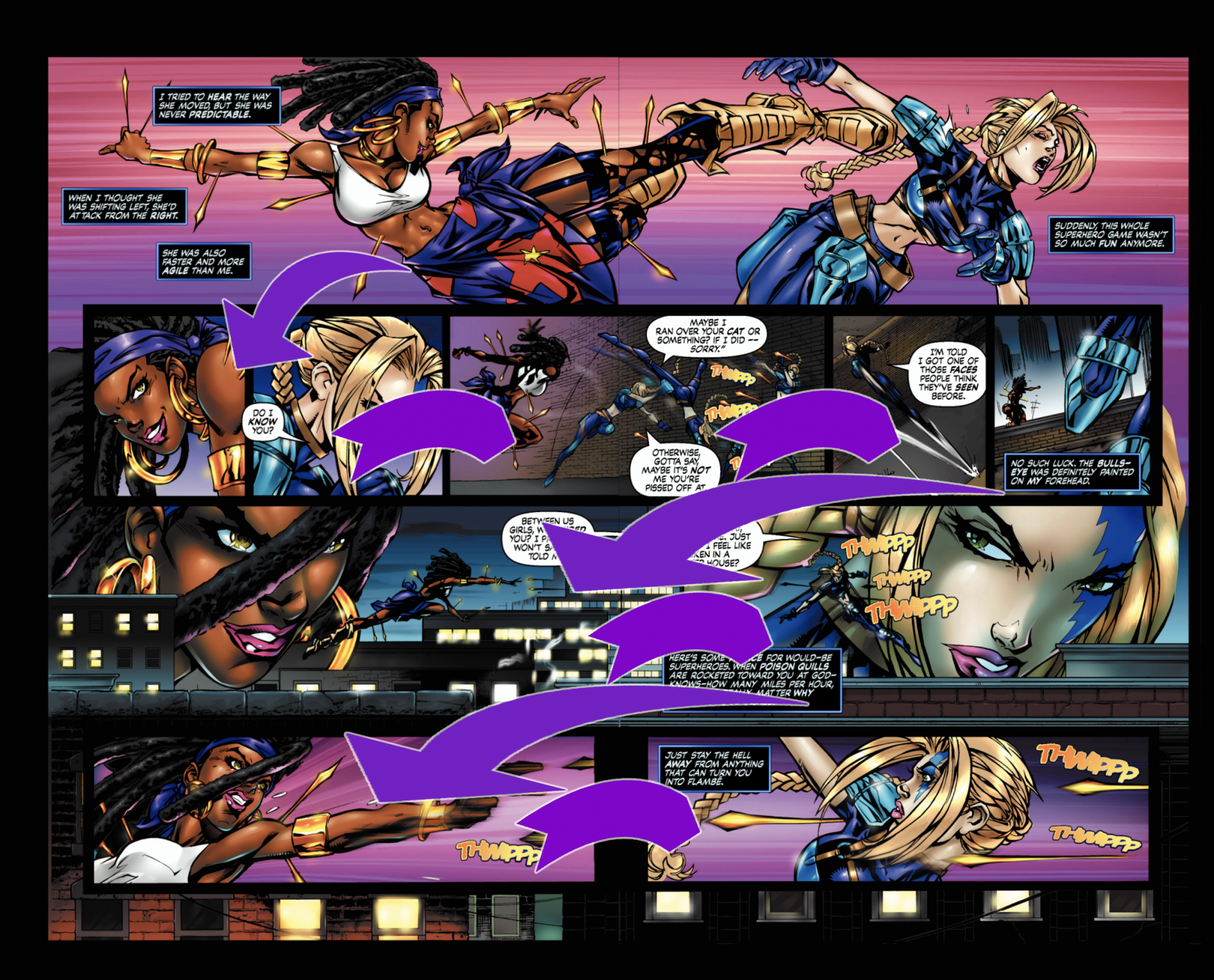 This is a 2 page spread from 10th Muse Volume 1 Issue 2. Simply look at both pages as if they were 1 single page. Let your eyes follow the panels naturally.

Just like in the movies, there is Indy VS Mainstream. The only difference is that with comics, Indy doesn’t mean some crap movie that you have to sit through to please your girlfriend. Here, Indy rocks.

Marvel, DC, and Image are basically considered the “mainstream”. Most people outside of the comics are familiar with their characters (Superman, Batman, Spider-Man, Captain America, and so on). But wait, theirs more...

Comics reach out to so many people with different backgrounds and likes. There’s a comic for everyone. It doesn’t matter if you’re into Historical (Tiger on the Storm), a hopeless romantic (Waiting, Dating, & Mating), Adult (Chubby NO!) there is something for everyone. If you get the chance, check out Top 2 for some action-packed adventures. 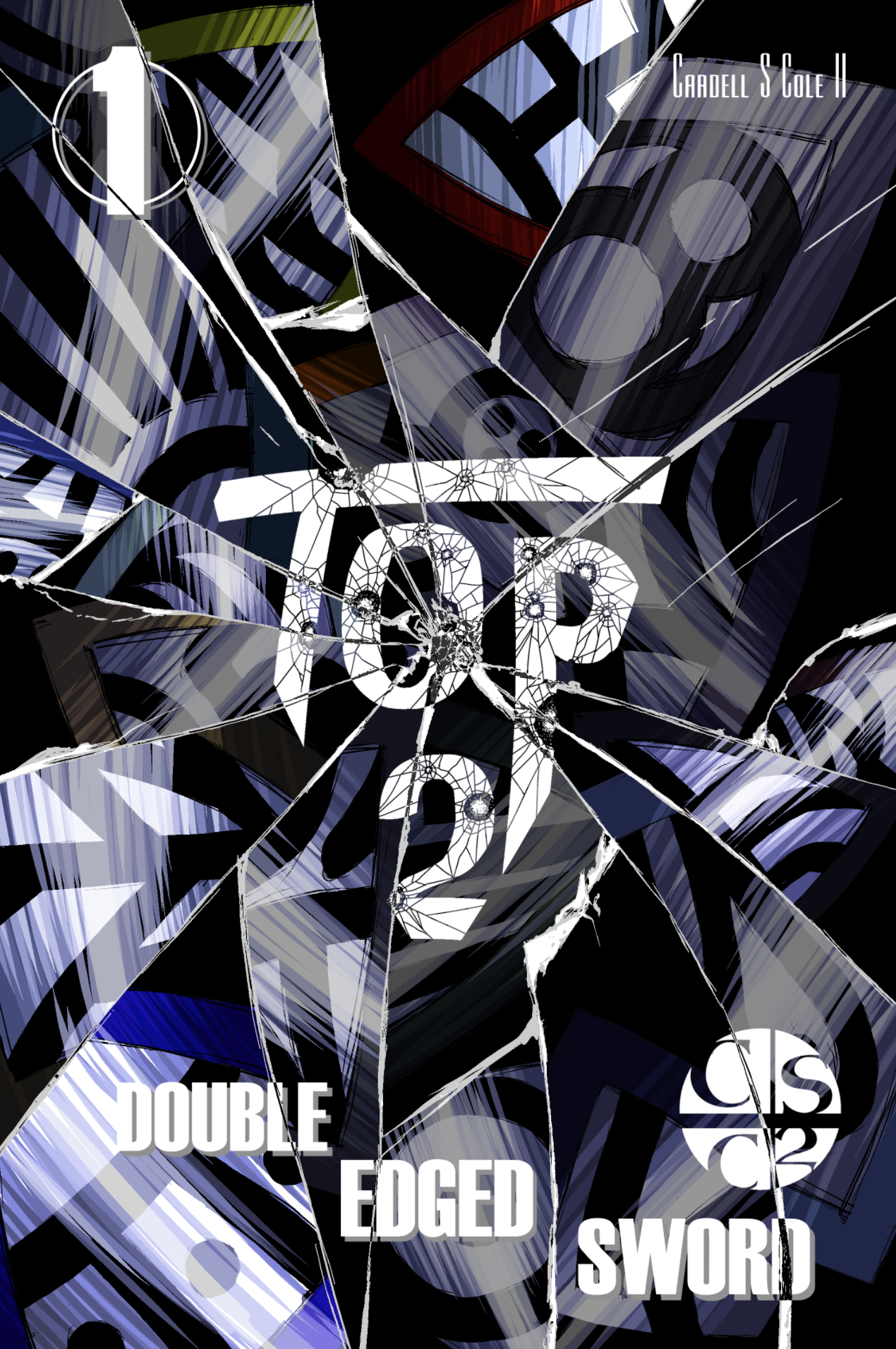 The joys of the Indies, is that they are not put out for the bottom line, the almighty dollar, but are a labor of love. The passion and enthusiasm really shows in these stories. Granted, the characters don’t have an “X” on their chest, but the characters are just as fleshed out without the major continuity errors that we see in the mainstream. That’s a post for a later date.

Amazing Stories in other media

The comics have had more time to flesh out the characters and stories so we are able to get to know them a lot better. We understand their history, their choices, and feelings. A movie is forced to tell the entire story in 2 hours, while with comics, we have had 80 years to get it right.

Many didn’t know that this was a comic book. There are some HUGE differences between the movie and the comic. The main difference is in the characters themselves. Evey was a teenage prostitute, V was more bloodthirsty and single-minded, and the Chancellor was far more ruthless but actually had his reasons.

God, I love this show. If you like your protagonist to be a smart@$$, look no further than Lucifer. Originally in the Sandman series by Niel Gaman, Lucifer was never a police consultant. He did own a nightclub and still offers “favors”, but that’s about it.

Where do we begin with this. First and foremost, the ending. Not to give any spoilers but Alan Moore designed a completely different ending than the movie. There were some other major changes although they used the comic as a storyboard so there are some scenes that are pulled exactly from the comic.

Comics are an ever-changing industry. It is a living breathing evolving thing. Some (myself included) consider this industry our babies and we love to watch it grow up. With the rise of Kickstarters and the downfall of DC as well as the ever-popular Marvel movies, the horizon looks beautiful.

There are many people that are trying to make predictions about the future of the industry but what we do know is that Indy is on the rise. With the advancements of technologies, web-based comics are also moving to the forefront of the industry.

CryptoComics Marketplace is out in front of it all; bringing you the very best Indy comics along with a web-based platform that uses the latest technology to turn your regular pdf versions of comics into an actual investment, and not just the digital version of a print-based comic.

Don’t get me wrong, I will always support and cherish the “floppy” versions of the comic, but now, I can save them and read the comic in a digital format that I can actually resell when I’m done.