The Future of NFT's & CryptoComics

by Matthew Russell - Posted 8 months ago 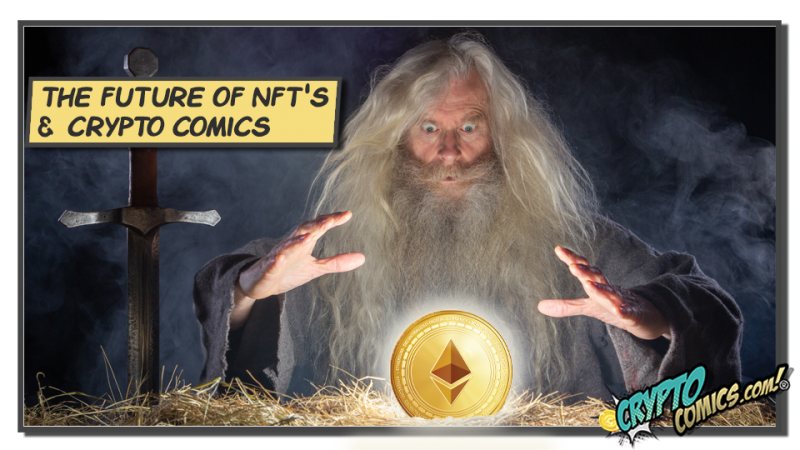 Welcome my CryptoComics Compatriots. I wanted to join you today in a lively discussion on the nature of NFT’s and how they will affect digital art in the future.

There are still so many questions people have when it comes to NFTs and how CryptoComics will handle them. Well, not just CryptoComics, but how will NFT’s be seen in the future?

I will be making some predictions and would love to hear your input on this. Let’s start with a basic overview.

At this point, most of you know what an NFT is, what it stands for, and so on. I could drone on about this but it would just bore you to death. Instead, head over to the blog post by our amazing Lindsey titled NFTs on CryptoComics for more details on this. She does a fantastic job of outlining an NFT and digging into the heart of the matter.

HOW HAVE NFT’s CHANGED THE ART LANDSCAPE?

Well, ever since they were created in 2012, people began to take notice of the efficiency and ingenuity of the “Colored Coins”.

The Colored Coins were tokens on the Bitcoin blockchain that merely represented a real-world asset. This could be used to prove ownership such as gold/silver, to cars, and houses.

Although this marked the beginning of NFT’s, it was still in its infancy. It wasn’t until the merger of Counterparty (a financial institution) and Spells of Genesis (a game creator) that we got a true widespread use of NFT’s with BitCrystals. These were merely in-game currencies as well as their own ICO.

That merger began in mid-2015 which was soon followed by a full trading card game early the next year. Counterparty brought in Force of Will (a leader in North American card games) into their ecosystem. This meant that games such as Pokemon, and Magic now could exist on the blockchain.

NFT’s still didn’t hit the mainstream lexicon until around 2018 with the NFT explosion. This all made the news when artist Kevin Abosch sold his Forever Rose (a piece of digital art) for a cool $1M in a charity auction.

It was at that point that the world decided to hop on the bandwagon and try its hand at the digital gold rush. NFTs were now a hot commodity.

There were sites everywhere selling them, and in my personal opinion, not always worth the money.

People were purchasing anything digital and an exuberant amount. Billionaire Jack Dorsey (co-founder and CEO of Twitter) sold his first tweet as an NFT. All it said was “just setting up my twttr”.

Now this has been publicly available FOR FREE for over 15 years. Last I heard it sold for over $2.5M. So what does actually mean? Well, you own it. You own that original tweet. You now have a certificate proving that this tweet belongs to you.

I have seen some absolutely amazing pieces of digital art for sale on various sites and have even published some of my own, but the prices were far too high for the average consumer to join in.

Some of the digital art looked as if a 5-year-old had drawn it while blindfolded. These still sold for an amount that would have made Solomon blush.

There were sites such as Cryptokitties or Cryptopunks where NFTs were priced rather low at first. I say at first because as soon as the general public found out that there were NFTs available for low prices then everyone started a bidding war that led to some of them going for $11.8M.

Now originally they were given away for free if you had an Ethereum wallet.

What makes an NFT so special? We often compare them to the Mona Lisa. Many of them are not on that level of artistic talent, but the point gets made.

It has been a long time since art school, but imagine that I dusted off my oil paints and brushes and grab a canvas. I somehow manage to paint a landscape that Bob Ross would be proud of, not that I’m capable of such a feat.

I manage to find an agent who is able to place this into a gallery/auction. It goes for millions (happy day!) and before it is shipped off to the buyer, I scan it and sell prints on my website for $49.00 with free shipping.

Does this scenario make the original piece of art worth any less? Does it devalue my canvas in any way?

Now let’s imagine that I create the same work of art. Instead of a canvas and paint, I use another program such as ProCreate to do this. This is merely painting in a different medium, nothing more.

Instead of looking for an agent who will find a gallery to action off my work, I turn to the internet. I find a site that will auction it for me.

I turn this work of art into an NFT and put it up for sale. All this means is that I have digitally signed and verified that this is the original. Eventually, I find a buyer who purchases it for the exact same millions of dollars. This time I don’t get paid in USD, I get paid in Ethereum which I can convert to USD through somewhere such as Coinbase.

So, my question to you is, is there a major difference or is this just the same process with the added bonus of technology?

PREDICTIONS FOR THE FUTURE OF NFT

It is my belief that the general public will eventually stop buying craziness such as someone’s tweets or a copy of someone’s YouTube video (Charlie Bit my Finger video sold for $760,999 as an NFT) and calm down a little on the crazy.

This doesn’t mean that NFT are going away, quite the opposite. I believe that they will be a mainstay in our lives, just not as absolutely insane. They will see their practical applications come to fruition.

Movies, music, and especially comics will be at the forefront of this movement in the future. Their practical business uses far outway their flashy current uses. As of today, there is so much hype and money being thrown at them that their “practical uses” get lost in the exposure of it all.

Eventually, when someone or a corporation purchases a video from YouTube as an NFT, it will simply be a rights issue. They will want to market that and sell it as a brand and not just say “I own that.”

More than anything, NFTs are the future of digital media.

So, what are your predictions for the future of NFTs? How do you see the comic market in the future?

The first being that we now have the ability to control the prices of gas. These fees are fees paid made by users to reimburse for the computing energy needed to process and validate transactions on the Ethereum blockchain.

Gas prices have skyrocketed and fluctuated so often that they can become unmanageable at times. If you wanted to buy a $1 comic and then had to turn around and pay something like $4 just in gas prices, that could turn off several readers.

Also by incorporating the StacksNet Blockchain, we are making NFT’s affordable for the little guy. It is no longer a rich man’s game. We can allow them to compete with the physical copy as far as prices.

The other great phenomenon is that the user experience will be so much better. You can purchase StacksNet credit with just the standard local currency instead of trying to figure out those clunky wallet systems.

There is another benefit for us. By testing CryptoComics on StacksNet we can find any little bugs before the general public at large.

If a customer finds a problem while we are on Beta, they contact us and we can resolve it. The customer could get awarded a badge for their efforts. If we were on the Ethereum Mainnet, one user running into an issue would result in hundreds of thousands of people running into that same problem.

With that, we would get flooded with bug reports and would have to spend more time mitigating the problem before we could even fix it. This would exponentially increase the amount of time that it would take to fix any bugs.

We believe that we might as well get it right the first time. Get rid of the bugs. Get rid of the problems. Then, and only then, we take CryptoComics out of Beta and begin live transactions.

Let us know what you think. How do you feel about NFT’s? Do you own any? Want more...