Kickstarter Project that you must see to believe - Temerity: The Runaway

by Matthew Russell - Posted 1 year ago

Welcome, my CryptoComic Compatriots! Today we are starting something pretty cool. We are always talking about Kickstarters & Indigogos and how you should support your favorite Indy Creators. It just dawned on us, that we have a blog, why not talk about them here too.

There are a ton of absolutely fantastic Indy creators that have taken us on a ride of a lifetime. Their journey through crowdsourcing and social media marketing is always a rollercoaster of adventure.

We see creators such as David Lillie, T3, Joe Spier, or Jesse Hansen hustle like their lives depended on it. They sweat and toil and market the hell out of themselves to get their various projects funded. Their passion show in the quality of their comics. I love those comics!!

As much as they work, there is one person that takes on several of these types of challenges before breakfast; Jemma Young.

Not only does she actively work on 2 other books on a regular basis, but she’s back with her co creator-owned comic with the legendary Chad freakin Hardin “Temerity: The Runaway.”

On every ad I’ve seen for Temerity, they describe it as Guardians of the Galaxy meets Firefly. That sets the bar pretty dang high. Let me tell you, after reading the first issue, it lives up to the hype. If anything, it downplays how exceptional this really is.

I’ll let them explain things. They do it better, after all.

Guardians of the Galaxy meets Firefly in this new SciFi comic by Harley Quinn artist Chad Hardin and indie creator Jemma M. Young. Temerity is about Taeru, who is a very serious genetically enhanced super-soldier. Naia is a less serious sugar-addicted mercenary. Together they’re the best work-for-hire duo in the galaxy. In an intergalactic world of mechas, brain hacking, and terrible pun t-shirts, Taeru and Naia spend their days performing daring missions for their clients and fighting their own personal demons. This is the first issue containing 22 full-color comic pages plus one bonus comic by Jemma! 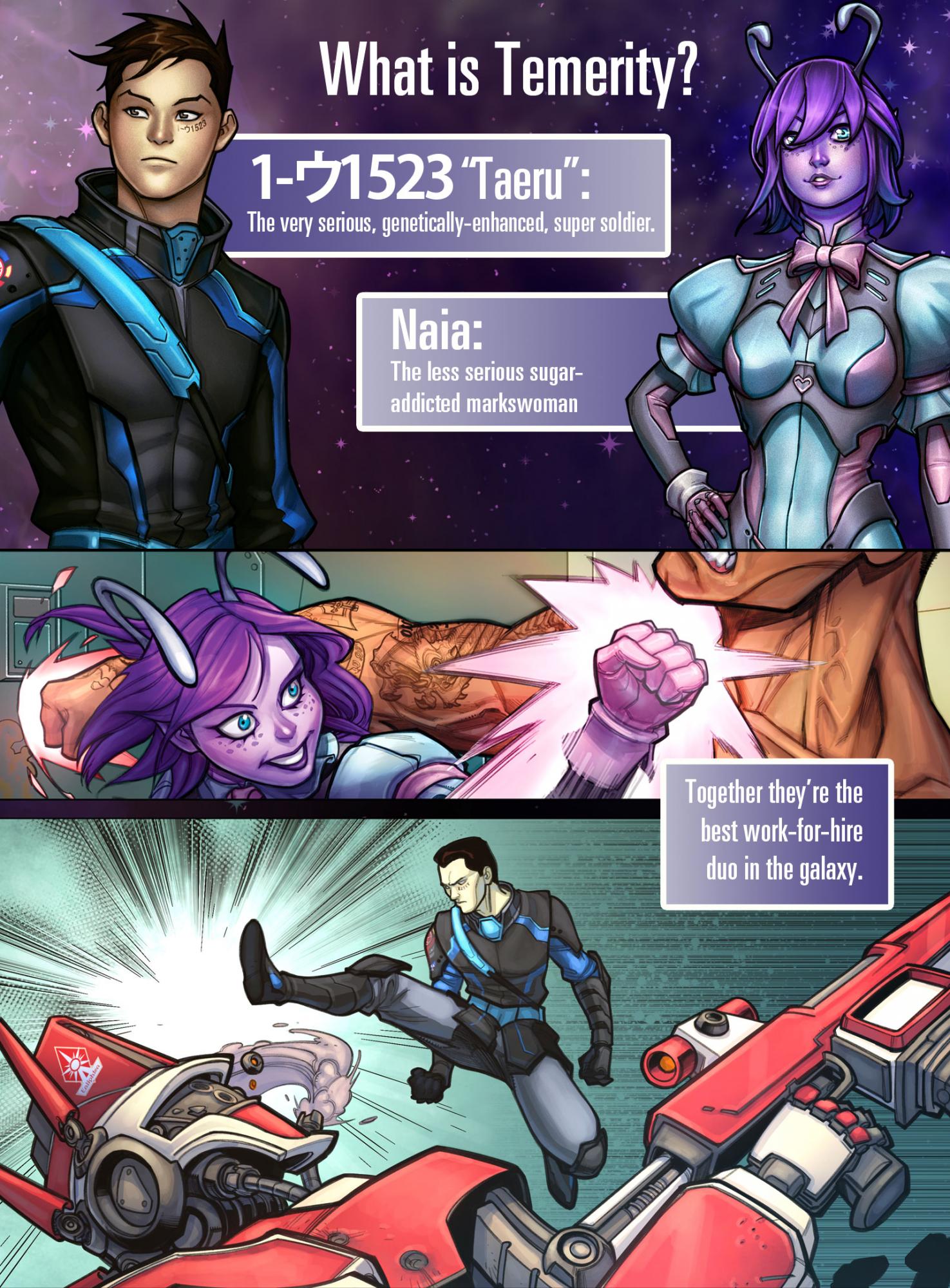 See, I told you. How cool is that!

It was so popular that it was fully funded in 11 hours and had over 500 backers. Its no wonder they hit over 200% of their goal. This creative team knows exactly what they are doing and they do it well.

The Story So Far

How do I explain this without any spoilers!?! Ok, it kicks off with some amazing action scenes. You can tell that Jemma really leaned into Chad’s ability to draw action.

It kicks off with one of the best Bounty Hunting since Boba Fett. All of this is followed by more action and tragedy that is so fun to read. You know what, I’ll just let you check it out here. Temerity: Sayonara. Pick it up and let your imagination run wild.

What can we expect from Temerity: The Runaway

Not to brag, but I’ve been given a sneak peek and well, even better than Sayonara. This series just keeps getting better and better. I especially love the part when CENSORED! MATT, SHUT UP ALREADY! YOU’RE GOING TO GET US IN TROUBLE! CENSORED! I mean COME ON! HOW COOL IS THAT!?!

Wait, did someone censor me? I guess it’s either that or Frey punches me for spilling the beans.

Ok, without giving away any secrets, these 2 have let us see some of their Tiered Rewards, and DANG! There is so much amazing stuff. The stretch goals too!! There is more content than you can shake a stick at!

Who are the minds behind Temerity: The Runaway

We have had both Chad & Jemma on our shows several times as well as worked with them during various CouchCon & Winter CouchCon panels. Every time it’s always so great to see them, especially when Jemma gives Jared a hard time.

Since we got to know them so well, we figured we would give you a chance to as well.

I’ve joked before that Jemma is the “Queen of Kickstarter” but seriously, it’s no joke. He has helped so many people navigate those treacherous waters, plus run so many of her own successful campaigns. She has mastered that platform.

You know what else she’s mastered, Indy Comics. If you have ever read her magnificent series Children of Eldair, or her beloved Zelda’s Lullaby series, you would know that there isn’t anything she can’t do. Her art has such an innocently beautiful quality that I love. She is an elegant writer, that knows how to add humor to her books without turning them into a slapstick comedy. Such an amazing writer! You can see her work on JemmaYoung.com

Details about the Temerity: The Runaway Release

You can find the Kickstarter here: Kickstarter - Temerity: The Runaway. Click the link and set a reminder for it when it goes live. As I said, you won’t be disappointed.

Of course, we will help kick things off with a top-notch Release Party. After all, we love to party. There will be some giveaways, badges earned, and more. The kickoff Release Party will begin at 1-19-21 at 9 pm est right here on our Twitch Stream (along with Facebook, & YouTube). Set a reminder. Like, share, get notified. You know what to do.

Leading Up to the Party

Yep, there are some events that lead up to the release party! We will be spotlighting both creators on our YouTube Channel and in our system along with some amazing How-To videos.

Chad is taking time off from Prep/Teaching/Drawing in order to teach us all How To Draw Naia. Follow that up with Jemma teaching a very VERY important lesson on how to run a successful Kickstarter campaign. This is a painstaking process that she learned first hand.

So, get the ins and outs, find out the scoop and be prepared because it is all coming at you starting real soon.

Reinventing the Comic Book Experience by Empowering Creators and Fans with a FREE Market for Everyone's comics. Come join the revolution!

Copyright © 2018 - 2022 CryptoComics.com. Software and Design by: apogeeINVENT
All Rights Reserved. All content (art and story lines) is owned by it's respective companies/creators.
We are an uncensored Marketplace built for the Creators of picture story based content and artwork, and strive to be a champion for the creator and the buyer. If it isn't illegal we allow it, and we are dedicated to letting natural market forces dictate content and price. The views and content of those Creators who publish on our website are their own and not necessarily that of CryptoComics Marketplace or its' affiliates.
LEGAL DOCUMENTATION
Terms | Privacy | Login | Community Guidelines  | Code of Conduct  | Copyright Policy  | Publishing Terms  | Referral Program  | Payments and Commissions  | Data Processing